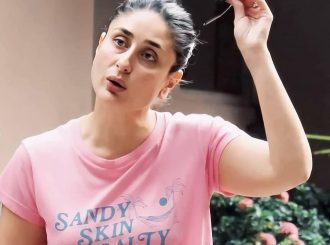 Kareena, who is currently vacationing in Europe with her husband Saif Ali Khan and sons Taimur and Jeh, has been speculated to be pregnant after one of her photos went viral where her belly looked like a baby bump.

Refuting such rumours, Kareena took to Instagram and uploaded a hilarious note.

"It's the pasta and wine guys...calm down...I am not pregnant.. uff..Saif says he has already contributed way too much to the population of our country...enjoy...KKK," she quipped.

Saif and Kareena got married on October 16, 2012. The couple had a simple court marriage and later an intimate wedding with all their closest family members present. They welcomed their first son, Taimur Ali Khan in 2016 and their second son, Jehangir Ali Khan was born in February 2021.

Saif was previously married to Amrita Singh but ended 13 years of relationship in 2004. He shares daughter Sara Ali Khan and son Ibrahim with her.