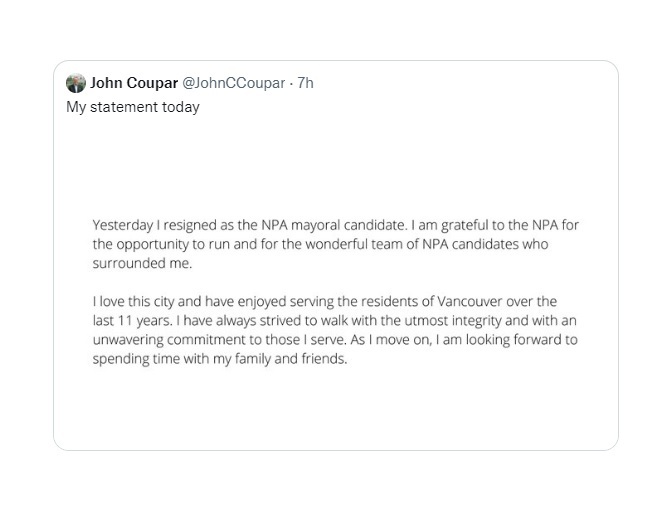 Vancouver's Non-Partisan Association, a key part of the civic political landscape in the city, has parted ways with its high profile mayoral candidate just months before municipal elections.

John Coupar, a three-term park board commissioner who was making his first bid for the mayor's chair, says in a statement that he resigned yesterday as the NPA candidate, although he didn't give reasons.

A statement from the party thanks Coupar for his 11 years of ``tireless dedication,'' and wishes him well, but also does not offer a reason for the split.

Coupar's appointment in April prompted three sitting NPA city councillors to quit the party, saying they were not informed of the selection process and it ``eliminated any opportunity for elected women in the N-P-A caucus to participate.''

The Greater Vancouver Zoo says one of the grey wolves that escaped their enclosure this week has been found dead. The z...

BC Liberal Leader Kevin Falcon and Elenore Sturko, BC Liberal candidate for Surrey South, are reaffirming their party’s ...

Environment Canada says heat warnings cover the inner south coast, most of the southern Interior and inland sections of...