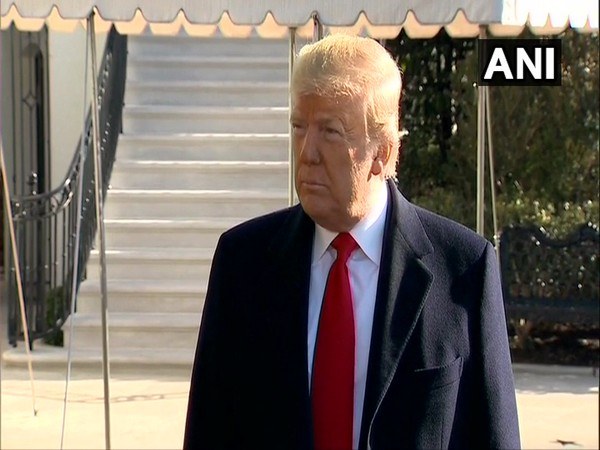 PM Modi a friend of mine: Trump as he departs for India/ ANI

US President Donald Trump and First Lady Melania Trump departed for their maiden two-day visit to India from Andrews Air Force Base in Maryland on Sunday.
The visiting dignitaries will have a stopover at Rhineland-Palatinate in Germany and will reach Ahmedabad on Monday.
Ahead of his departure from Washington DC, the US President told reporters that he looks forward to being with "millions and millions" of the Indian people.
"I look forward to being with the people of India. We will be with millions and millions of people. I get along very well with the Prime Minister. He is a friend of mine. Prime Minister Modi told me this will be the biggest event they have ever had," Trump told reporters here.
The US President, along with his family, and a ministerial delegation will be in India for around 36 hours. During the visit, he is scheduled to participate in a roadshow with Modi and address a gathering at the Motera Stadium.
From Ahmedabad, the US President and the First Lady will make a brief stop at Agra where they will visit the Taj Mahal at around 5:15 pm, before departing for the national capital later in the day for the main leg of the trip.
On the morning of February 25, the US President will first receive a ceremonial welcome at the Rashtrapati Bhawan at 10 am as per the protocol. From there, he will go to the Rajghat to pay homage at the samadhi of Mahatma Gandhi.
This will be followed by both, restricted, and delegation-level talks between Trump and Modi at the Hyderabad House in the national capital on Tuesday afternoon.
The talks would be followed by the exchange of agreements and Memoranda of Understanding (MoU) between the two countries.

Prime Minister Justin Trudeau is on his way home from a trio of summits that saw leaders focus heavily on Russia's war ...