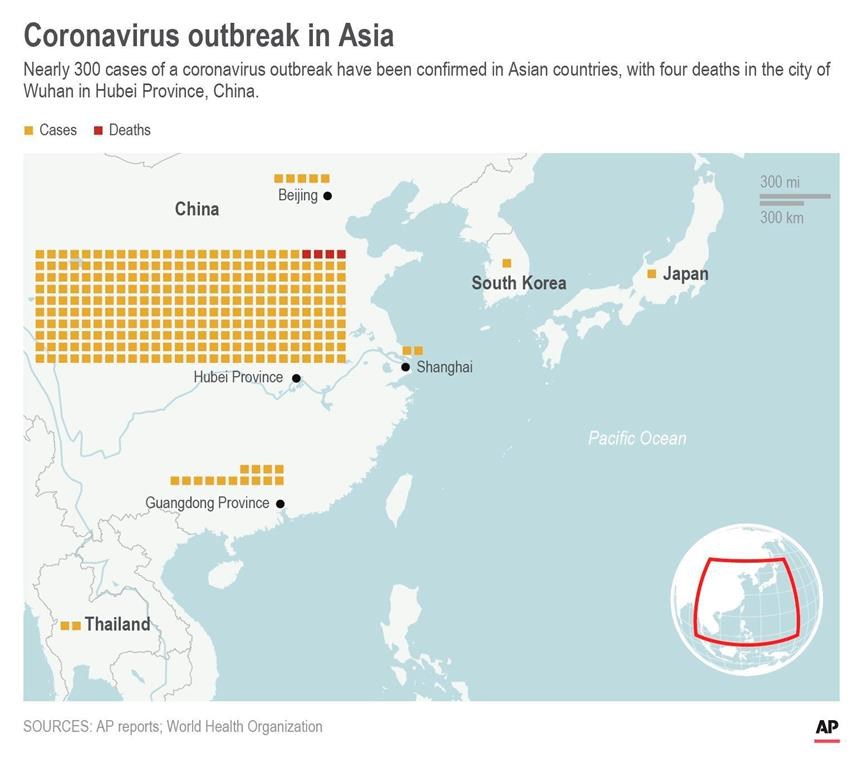 Three possible cases of a new type of viral pneumonia have been investigated in Canada and ruled out as coronavirus, the country's chief public health officer said Monday.

The World Health Organization, meanwhile, announced plans to hold an emergency meeting to decide whether the illness linked to three deaths in China is an international emergency.

Dr. Theresa Tam declined to say where in Canada the potential cases were located, but she said the individuals had travelled to Wuhan, the Chinese province where coronavirus is believed to have originated in a now-closed seafood market before being detected in Shenzhen and Beijing and beyond to Japan, Thailand and South Korea.

"What I can say is that I did immediately contact my counterparts, the chief medical officers of health, in the provinces and territories.

They in turn have notified their front line in terms of their health system," Tam said.

The novel coronavirus was thought to spread from animals but Chinese officials have said it's now being transmitted from human to human and 217 cases had been confirmed as concerns mount the virus may be increasingly transmitted during the upcoming Chinese lunar new year holidays.

Canadians are at low risk of contracting the illness, Tam said, adding precautionary measures are being taken, including screenings at airports in Vancouver, Toronto and Montreal of passengers who have flu-like symptoms after travelling from Wuhan in central China. Messages in English, French and simplified Chinese will also appear on arrivals screens at the airports in the coming weeks, Tam said.

The measures are similar to those at airports in San Francisco, Los Angeles and New York as well as in some Asian countries. An additional health screening question will be added to electronic kiosks on whether passengers have travelled to an affected area in the last 14 days, she said.

"It is important to take this seriously and be vigilant and be prepared but I don't think there's any reason to panic or be overly concerned," Tam said, adding the novel virus has non-specific symptoms, such as fever, cough and difficulty breathing.

Coronaviruses, including severe acute respiratory syndrome, or SARS, first infected people in southern China in late 2002 before spreading to more than two dozen countries and killing over 900 people globally, including 44 in Canada.

Two commissions of inquiry criticized the health system's response to SARS, leading to changes including the creation of the Public Health Agency of Canada. Tam said Canada is now better prepared to respond to similar situations.

"We have governance mechanisms with the provinces and territories," she said, adding that a national laboratory to test for infectious diseases also owes its existence to the tragedy, which mostly involved people in the Toronto area in Canada.

She said the severity or the full spectrum of the current coronavirus is unknown.

The World Health Organization is expected to meet on Wednesday.

Tam said if an international emergency is declared, the agency will make temporary recommendations that Canada would adopt.

Dr. Allison McGeer, who was head of infection control at Mount Sinai Hospital in Toronto during the SARS outbreak and is now a researcher in the field there, said trying to stop coronavirus at airports through current screening measures won't help if an increasing number of people are exposed.

McGeer, who contracted SARS at a Toronto hospital while at the centre of the early response to the virus, noted the Spanish flu pandemic that swept the world between 1918 and 1920 killed an estimated 50 million people, decades before extensive air travel.

"Screening at airports is difficult to do well and very expensive, so what we want our government doing is thinking very carefully about what the right extent is and the timing of it and making decisions based on science and evidence, not based on what our gut feeling is because the gut feeling tends to be we can control this at our borders, we can stop it coming in.

McGeer said pandemic preparedness policies are much more applicable to slowing a virus's transmission in populations.