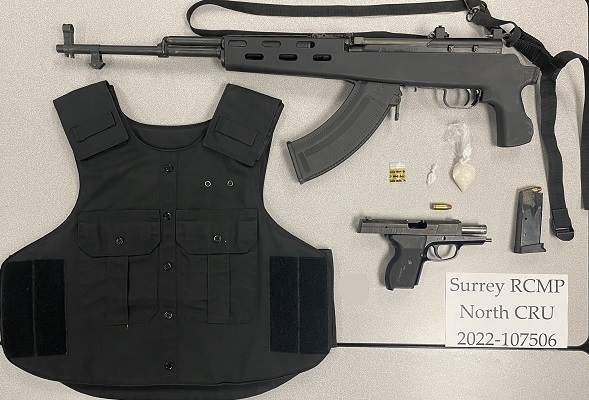 The Surrey RCMP Community Response Unit have arrested three individuals on multiple warrants during two recent traffic stops, seizing firearms and body armor. Assistance from the Air 1 Helicopter helped track down one the suspects, who fled from police and was later arrested on a Canada Wide Warrant.

On July 21, 2022 at 6:23 p.m., Surrey RCMP Community Response Unit officers conducted a traffic stop of a vehicle that had inactive insurance in the 9900-block of 154 Street. A 40-year-old man who is a prohibited driver, and 20-year-old woman, were arrested on several outstanding warrants out of Surrey, Kamloops, Oliver and Kelowna. A search of the vehicle revealed a rifle with loaded magazine, a loaded handgun and body armor which were all seized. Both parties remain in custody awaiting their next court appearance and additional firearms charges have been recommended.

Just over 24 hours later, on July 22, 2022 at 8:39 p.m., Surrey RCMP Community Response Unit officers conducted queries of a vehicle that was registered to an inmate with an outstanding Canada wide warrant in the 10800-block of University Drive. The male became aware of police following him and attempted to evade officers through dangerous driving behaviors such as speeding and running red lights. The Air 1 Helicopter was able to safely track the vehicle from above, following the driver as he travelled from north to south Surrey, ultimately stopping at a gas station in the 14300-block of Crescent Road. A 37-year-old man was arrested on a Canada Wide Warrant and his vehicle was impounded.

Our Community Response Unit officers have a keen eye for spotting suspicious vehicles and drivers, which has resulted in arrests and firearms seizures, says S/Sgt Nigel Pronger, North Community Response Unit Commander. The ability to interdict criminals is enhanced by our partnership with Air 1, providing eyes from above to safely maintain a track on fleeing suspect vehicles.

As prices soar at the pump and cost of living continues to rise, the BC Green Caucus is calling on the province to work ...

Immunization clinics throughout the Fraser Health region are now providing more people with opportunities to receive a C...

United Surrey is committing to dramatically increasing utilization of and participation with city services and programs ...