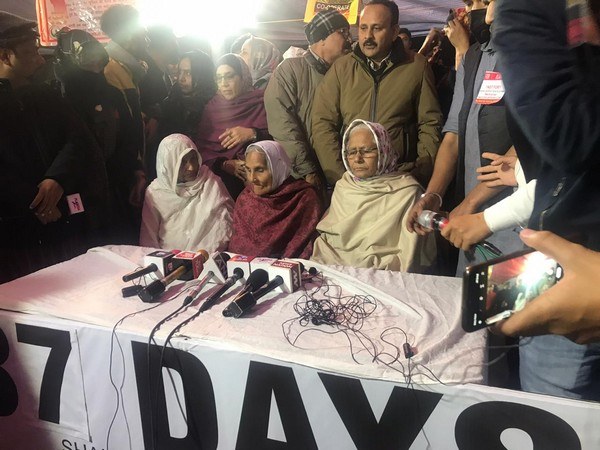 A delegation of protestors, including elderly women from Shaheen Bagh area, which met Delhi Lieutenant Governor/Photo-ANI

A delegation of protestors, including elderly women from Shaheen Bagh area, which met Delhi Lieutenant Governor (LG) Anil Baijal on Tuesday regard to their over month-long protest against the Citizenship Amendment Act (CAA) and the proposed National Register of Citizens (NRC) said they were not pressurised to meet anyone.

An elderly woman, who was among the delegation said they will continue their protest and block roads on January 29 if the proposed CAA and NPR are taken forward by the government.

Earlier today, Baijal called for maintaining peace and order and urged the protestors to call off their agitation in view of continued inconvenience to locals due to the blockade of road.

"Met delegation of protestors from Shaheen Bagh. Assured them to convey their concerns to appropriate authorities. Appealed to call off their agitation in view of continued inconvenience to locals due to blockade of road. I once again request all to maintain peace and order," the LG tweeted.

Three elderly women -- Bilkis, Sharvari and Nurnesha -- were part of the delegation which met Baijal today.

"We were not coerced by anyone. He (Baijal) listened to us. If (Prime Minister Narendra) Modi is our son, then why did he not meet us and chalk out a solution," the woman said.

They also said that their concerns have been forwarded to the Prime Minister and Home Minister Amit Shah through a letter. Meanwhile, a petition was filed in the Supreme Court on Monday seeking directions to the police to open Kalindi Kunj-Shaheen Bagh stretch, which has been closed since December 15 due to ongoing protests against the CAA.

The petition said that the public at large is facing huge inconvenience and hardship as the road is blocked and residents, shopkeepers, children, and patients are facing extreme difficulties. Recently, the Delhi High Court asked the Delhi Police to look into the matter of blockage of Kalindi Kunj road due to the protest at Shaheen Bagh. Also, on Tuesday the National Commission for Protection of Child Rights (NCPCR) took up a complaint on viral videos of children participating in protests at Shaheen Bagh. It wrote to the district magistrate of South Delhi asking the authority to submit a detailed report within 10 days.

The letter read: "As per the complaint, there are children shouting that their elders have told them that the Prime Minister and Home Minister of India will ask them to produce documents of citizenship and if they fail to produce they will be sent to detention centres where they will not be allowed even food and clothing."

The child rights body requested the district magistrate to direct the "District Child Protection Officer (DCPO) along with Police Child Welfare Officer/SJPU to identify children, shown in the viral videos, and arrange a counselling session for them and their parents if deemed fit".