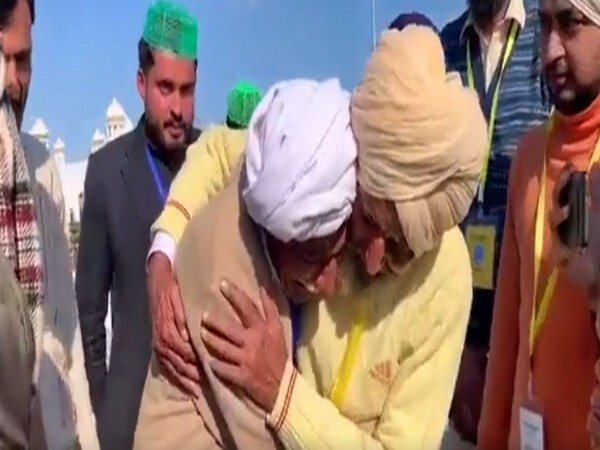 Two brothers, who were separated during the India-Pakistan Partition in 1947 were reunited after 74 years in Kartarpur, local media reported on Wednesday. (Photo - ANI)

Two brothers, who were separated during the India-Pakistan Partition in 1947 were reunited after 74 years in Kartarpur, local media reported on Wednesday.

A video capturing the visibly emotional reunion of the siblings on Tuesday has been widely circulated on social media.

The News International reported that Siddique, a resident of Pakistan's Faisalabad, met with elder brother Habib who arrived at Kartarpur from the Phullanwal area of Punjab in India via the Kartarpur Corridor that connects Gurdwara Darbar Sahib in Pakistan to the border with India.

The brothers could not control their emotions and burst into tears of joy after meeting embracing each other and recalling memories.

During the meeting, Habib lauded the initiative of Kartarpur, saying that the corridor helped him to reconnect with his brother.

According to The News International, he told his younger brother that they will continue meeting through the corridor.

Meanwhile, social media was abuzz with comments of users who viewed the touching video of the reunion.

Reports quoted the brothers thanking the governments of the two countries for opening the Kartarpur Corridor facilitating a visa-free travel from India to Pakistan up to Kartapur.

In a major decision, Prime Minister Narendra Modi-led Indian government decided to re-open in November 2019, the 4.7-kilometre-long Kartarpur Corridor that was closed in wake of the COVID-19 pandemic.