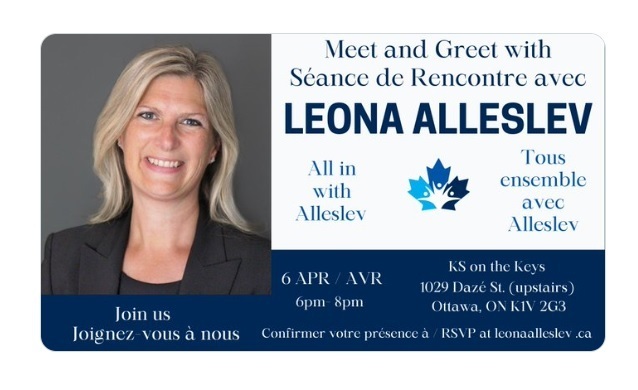 Former Conservative deputy leader Leona Alleslev is set to formally announce her candidacy to be the party's next leader tomorrow. (Photo - Leona Alleslev/Twitter)

Former Conservative deputy leader Leona Alleslev is set to formally announce her candidacy to be the party's next leader tomorrow.

A source close to her campaign, speaking on the condition of anonymity, says she is expected to do so in Ottawa on Wednesday.

Alleslev has all but formally made the announcement, having set up a campaign website to collect signatures needed for her nomination.

She also posted on social media about hosting a meet-and-greet in Ottawa Wednesday, along with the tag line ``All in with Alleslev.''

Alleslev was first elected as an Ontario Liberal MP who crossed the floor to join the Conservatives in 2018.

She was appointed to serve as deputy leader of the party by former leader Andrew Scheer before she stepped down from that role to help former federal Progressive Conservative leader Peter MacKay in the 2020 leadership race.