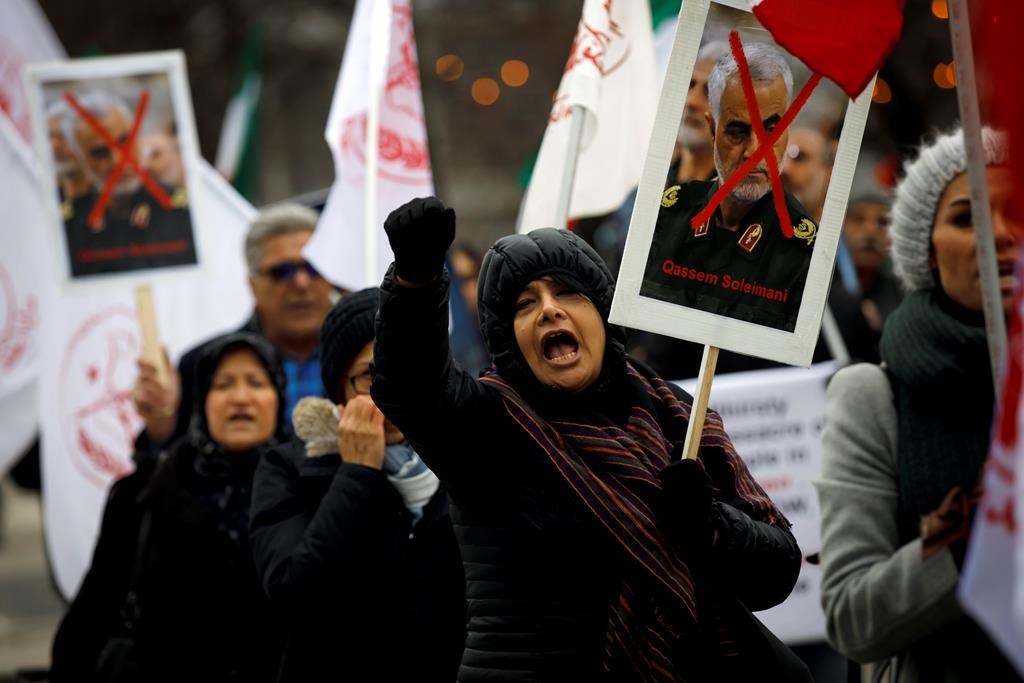 A few dozen Iranian-Canadians gather in Toronto on Friday to celebrate the death of a top Iranian general in Iraq in Toronto, Friday, Jan. 3, 2020. Gen. Qassem Soleimani was the head of Iran's elite Quds Force, and was killed in Baghdad, Iraq, late Thursday. THE CANADIAN PRESS/Cole Burston

Several dozen Iranian-Canadians danced and cheered in Toronto on Friday as they celebrated the death of a top general in their home country.

But for those who showed up to dance in a square in north Toronto Friday afternoon, Soleimani's death marked what they hoped would be a re-birth for Iran. Chants of "regime change in Iran by the people of Iran" and "we support uprising in Iran" rang out at the rally.

"We are in a great world now after Soleimani's elimination," said Hamid Gharajeh, a spokesman for the Iran Democratic Association of Canada. "I feel wonderful because we really think this is long overdue."

Over the last two decades, Soleimani had assembled a network of heavily armed allies stretching all the way to southern Lebanon on Israel's doorstep. While Iran’s conventional military has been constrained by 40 years of American sanctions, Iran can strike asymmetrically in the region through its allied forces like Lebanon’s Hezbollah, Iraqi militias and Yemen's Houthi rebels.

Trump said Friday he acted to stop a war rather than start one, although many observers saw the airstrike as a major escalation of tensions between the U.S. and Iran. American officials said they had intelligence Soleimani was planning a significant campaign of violence against the U.S.

It also accused Soleimani of approving orchestrated violent protests at the U.S. Embassy in Baghdad.

Gharajeh left Iran in 1977 to go to university in the U.S., then moved to Canada about 10 years later. He has never gone home, but still has family in Iran and hopes to return one day.

"My father and mother passed away in Iran, but I've never been to their graves," he said. "The dream is going back to a free Iran."

Others taking part in the Toronto rally said they hope Soleimani's death will be the catalyst for regime change.

"We want peace in the region, not terrorism," said Sara Fallah, the director of the International Coalition of Women Against Fundamentalism.

"Anyone who cares about human rights should be against terrorism and celebrating the death of Soleimani."

Fallah said she left Iran when she was young to come to school in Canada. She has never returned.

Behza Matin said he danced when he first heard the news of the general's death.

The scene contrasted with the reaction in the Iranian capital of Tehran where thousands took to the streets after Friday Muslim prayers to condemn the killing, waving posters of Soleimani and chanting "Death to deceitful America."