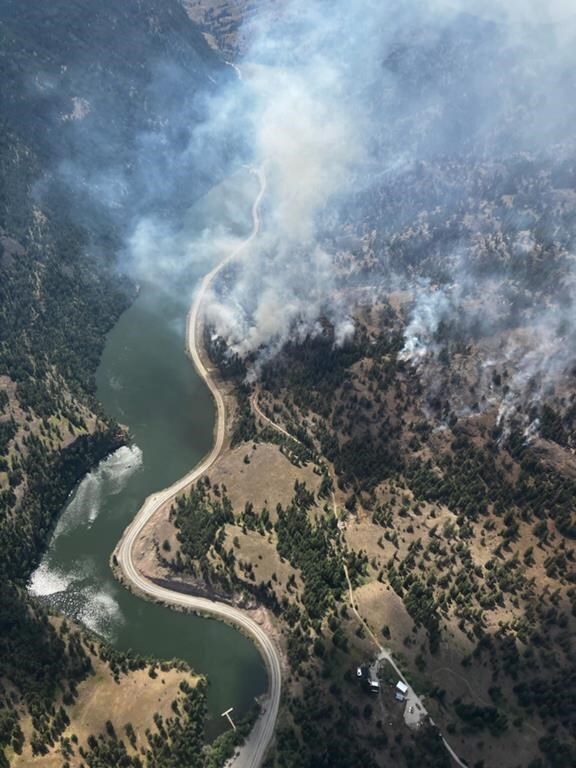 The BC Wildfire Service says almost 400 firefighters are now assigned to the blaze burning southwest of Penticton in the southern Okangaan. (Photo - The Canadian Press)

The BC Wildfire Service says almost 400 firefighters are now assigned to the blaze burning southwest of Penticton in the southern Okangaan.

A flare-up yesterday forced the Regional District of Okanagan-Similkameen to order the entire community of Olalla to evacuate, affecting about 400 people, while the Village of Keremeos and surrounding areas are on evacuation alert.

Highway 3A which runs through Olalla and connects Keremeos to Kaleden is also closed until further notice.

Hundreds more homes are also on evacuation order or alert due to the blaze which was sparked last Friday and now covers about 42-square kilometres threatening homes and properties as far west as the Apex Mountain resort.

The B-C Wildfire Service says six blazes, which are either highly visible or threaten properties, are ranked as wildfires of note, but rain has helped crews working to contain two of them.

The Greater Vancouver Zoo says one of the grey wolves that escaped their enclosure this week has been found dead. The z...

BC Liberal Leader Kevin Falcon and Elenore Sturko, BC Liberal candidate for Surrey South, are reaffirming their party’s ...

Environment Canada says heat warnings cover the inner south coast, most of the southern Interior and inland sections of...