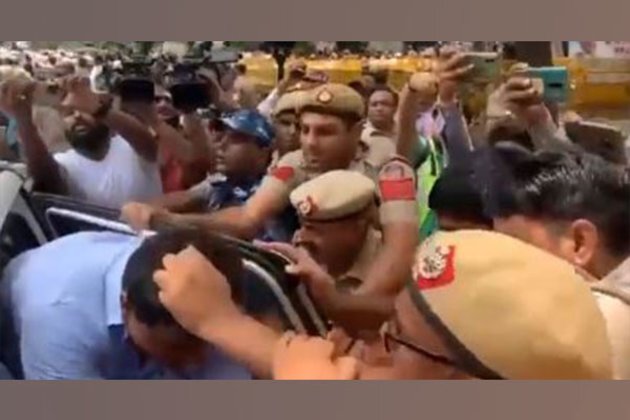 Delhi Police personnel on Tuesday were seen grabbing Indian Youth Congress chief Srinivas BV by the hair and forcing him into a vehicle during a protest against the questioning of Congress interim president Sonia Gandhi by the Enforcement Directorate (ED) in the National Herald case.

Srinivas was seen shouting and resisting attempts by police to subdue him.

Sonia Gandhi's second round of questioning in connection with the National Herald case began earlier Tuesday.

Congress leader Rahul Gandhi along with several party leaders was detained by Delhi Police on Tuesday at Vijay Chowk during MPs' march to Rashtrapati Bhavan. "Around 50 MPs along with Rahul Gandhi were detained from the North fountain near Parliament. They were detained in Kingsway Camp," said the Deputy Commissioner of Police, New Delhi.

The first round of questioning was conducted on July 21 when several Congress leaders were detained as the party put a show of strength by staging nationwide demonstrations in support of the party chief.