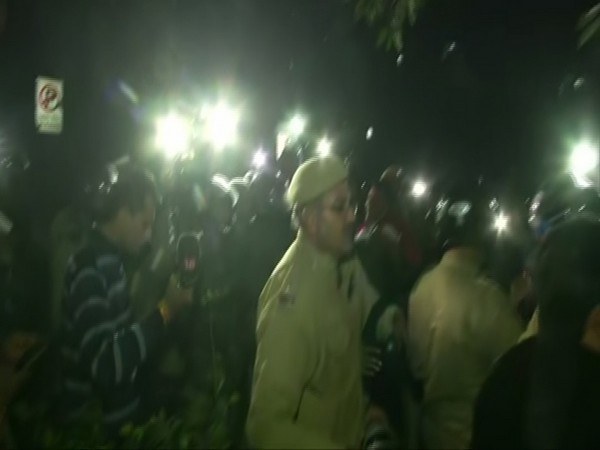 Heavy deployment of police inside and outside JNU/ ANI

Delhi Police entered Jawaharlal Nehru University (JNU) campus on Sunday on the request of university administration following the violence that erupted after a masked mob entered the premises and attacked the students.

"Delhi police entered the JNU campus after a request from the university administration. Two groups in the university had been clashing for the past few days," police said.

"The incident took place at around 5pm when scuffle broke between two groups. They vandalised University property, damaged private vehicles and moved towards the hostel. JNU administration made a written request to Delhi police to intervene. That's when the Police entered the campus. A flag march was conducted. The situation is normal now," police said.

Akhil Bharatiya Vidyarthi Parishad (ABVP) and the Jawaharlal University Students' Union (JNUSU) traded blame for the attack on the students.

Delhi Chief Minister Arvind Kejriwal expressed his shock over the violence at the JNU and said how will the country progress if students are not safe in the university campuses.

"I am so shocked to know about the violence at JNU. Students attacked brutally. Police should immediately stop violence and restore peace. How will the country progress if our students will not be safe inside the university campus?" tweeted Kejriwal.

The Chief Minister's tweet came after the attack on campus.

According to the officials, seven ambulances have been sent to the JNU and 10 more are on standby. Heavy police have been deployed at the main gate of the University following the violence.

"I have been brutally attacked by goons wearing masks. I am bleeding. I was brutally beaten up," JNU Students' Union (JNUSU) president Aishe Ghosh told reporters. She has been admitted to the AIIMS here for treatment.

Several other students were also injured in the incident.

In a video of the incident, a group of goons with their faces covered can be seen assaulting students with wooden sticks and rods.