BC RCMP statements regarding loss of Burnaby RCMP Officer 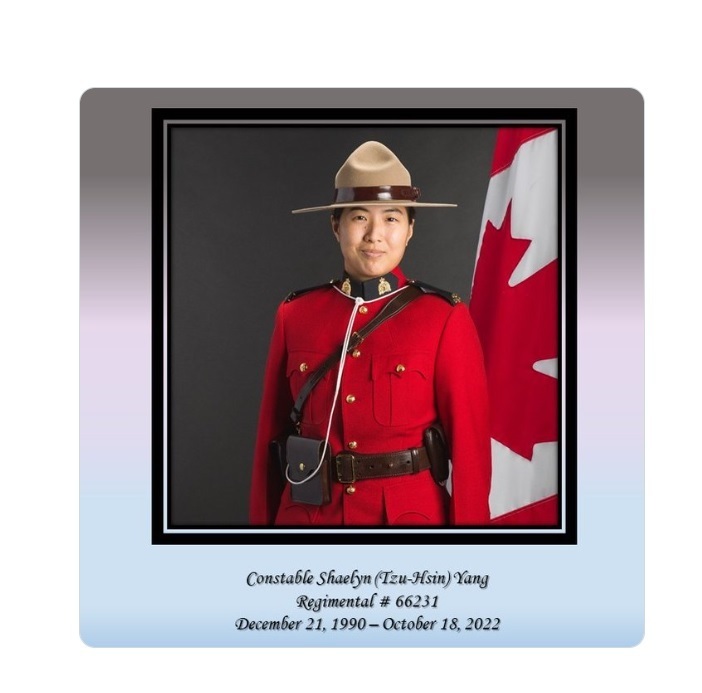 I am Deputy Commissioner Dwayne McDonald, the Commanding Officer of the BC RCMP.

It is with a deep and profound sadness that I must advise the public of the homicide of Burnaby RCMP Cst. Shaelyn Yang that occurred this morning in the line of duty.

This is an extremely difficult and tragic day for the BC RCMP and members of Burnaby Detachment.

I have spoken with acting RCMP Commissioner Brian Brennan and he has kindly offered any and all support necessary.

It is with deep sorrow that I stand here today with Burnaby’s Officer-in-Charge, Chief Superintendent Graham De La Gorgendiere to announce this terrible news.

I join with him and the Commissioner in expressing our heartfelt condolences to Cst. Yang’s family and extended family, friends and colleagues.

Cst. Yang lived in Richmond and was an active volunteer. She started her career volunteering part time with the Richmond RCMP’s Victim Services unit later as a full-time volunteer.

In 2019, she decided to become a police officer and entered training at Depot in June of that same year. Cst. Yang graduated in December as a member of Troop 8 and was posted to Burnaby Detachment. She was a loving wife, sister and daughter.

Those she worked with before joining the RCMP and her police colleagues today, describe Cst. Yang as a kind and compassionate person, which makes her death even more difficult to accept.

As to the investigation, there are few details we can provide at this time, but what I can tell you is, at approximately 11:05 a.m., Cst. Yang, partnered with a City of Burnaby employee, and was engaged in her duties at a homeless camp on Gilmore Way. An altercation took place, and Cst. Yang was fatally stabbed. Emergency responders attended the scene and despite their best efforts, Cst. Yang succumbed to her injuries.

The suspect associated to the file was also shot and injured – they remain in hospital with non-life threatening injuries. I can also tell you that Cst. Yang died bravely; she answered the call to duty and paid the ultimate price. The Independent Investigations Office of BC (IIO BC) is now investigating the incident.

A concurrent investigation into the murder of Cst. Yang is also underway and will be conducted by the Integrated Homicide Investigation Team (IHIT).

As the Commanding Officer of the BC RCMP, I can tell you that an on-duty death is the most difficult and heart-wrenching incident we deal with as an organization. Each and every day, police officers say good bye to their loved ones and go off to work to serve their communities with commitment and in Cst. Yang’s case compassion for the people she served.

I also want to thank the many police leaders who have offer their condolences and support and for those agencies that responded and assisted us, and continue to assist us, in our time of need.

The loss of Shaelyn will be felt by so many. Her death impacts her family, friends, the wider RCMP family, and the vulnerable community she so passionately served. Her loss is immeasurable.